Yes, they can! This isn’t as mad as it sounds. Just as warm air comes out of the back of your fridge, the giant coolers at Sainsbury’s produce a huge amount of waste heat that goes unused. At Rose Hill Community centre last night, Andy Edwards, of Project ERIC, explained BioRegional’s research into a possible way of using the waste heat from Sainsbury’s coolers to heat houses in Rose Hill. 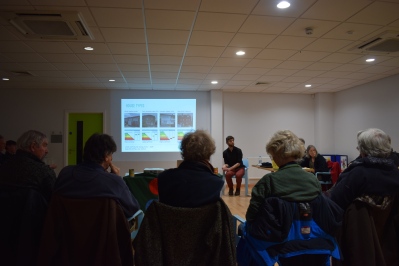 This exciting idea could mean lower fuel bills for Rose Hill residents over the next twenty years. It’s still only at the planning stage, and would be a major project if it gets the go-ahead, but it could be a great way to build on the renewable energy already working well in Rose Hill. Now we have solar panels and battery storage on 82 households, as well as solar panels on the school and Community Centre. Also at the Community centre, there is an electric car (powered by the solar panels), which can be used by anyone who signs up to Co-Wheels Car Club (www.co-wheels.org.uk). Two weeks ago, Rose Hill School launched its ‘zero-carbon classroom’ powered entirely by solar panels, with battery storage and LED lighting – crowd-funded by members of the community.

After Andy’s talk, there was a well-informed discussion between the residents and technology experts – some of whom were both! Watch this space for the next step in Rose Hill’s Renewable Revolution!

Our next meeting follows our recent thermal imaging campaign when we took thermal photos of twenty houses to show where they leak heat. It will be an advice evening, suggesting practical ways of saving on fuel bills and keeping warm for the rest of this winter and winters to come. The meeting is at 7.30 pm on Fri 17th February at Rose Hill Community Centre. You’re welcome to come along. 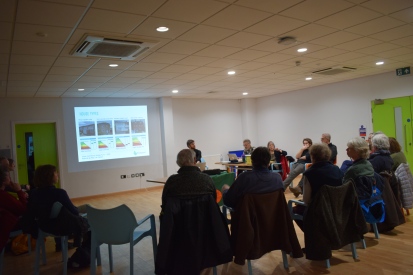